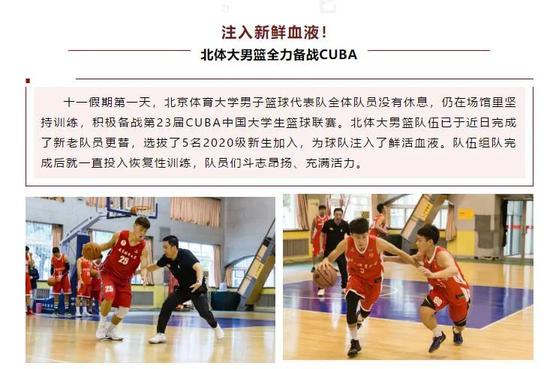 Do you remember the news that the teacher wrote a few days ago about the withdrawal of CUBA? After many media reports, the pressure of public opinion is increasing, and the school is actually relieved! Beijing Sport University officially announced that the school’s men’s basketball team has completed the transition from new to old and is preparing for the new season of CUBA. The team also selected 5 2020 freshmen to join.

According to the North Sports University player Cheng Xinkai previously revealed that the school management will not allow the team to participate in the new season's CUBA for a simple and crude reason: if you can't make the top three in the country, you will not be allowed to play! Because of this decision, North Sports University missed the CUBA registration date, and the league opened a special case, and they were able to continue their campaign. There are also fans who think that this special case should not be opened. Missing registration is originally the school's own responsibility.

However, some fans believe that the players of the North Sports University are innocent and they are also victims. For those players who are about to graduate, this may be their last CUBA. Some managers talk about performance only. They don't know what basketball means to these players, and they don't see how hard the players train. The new season of CUBA will start on October 10, and everyone will be in the training hall during the Mid-Autumn Festival.

In the last CUBA, Beijing University of Physical Education broke into the top 16 in the country and has set a record in school history. Many people don't understand: Why do sports schools have average results? Sports colleges such as North Sports University, Upper Sports, Adult Sports, and Martial Arts previously could only participate in CUBS (Super League) and could not participate in CUBA. In 2017, the two leagues merged, and North Sports University participated in the CUBA for the first time. It only took three to four years.

Besides, the team's poor record is not because these players didn't work hard. The basketball recruits of Beijing Sports University are inherently disadvantaged. Many of the main players in the team are single or general recruits. The quality of their students is incomparable with famous universities such as Tsinghua University and Beijing University. Rather than complaining about not being able to make the top three, those managers should think of a way to recruit some good basketball players for the North.

Campus basketball is different from professional basketball. There is no salary, and there is no big contract of millions or tens of millions. These players are all students, and they work hard every day to train and compete. Isn't it because of the love in my heart? We always say that we envy the NCAA. There are tens of thousands of spectators, and the NBA has to give way... Nowadays, even the school leaders do not support their own basketball team, then how does our CUBA develop?

There was a message below the previous manuscript of the teacher, which touched me deeply: the school team didn’t even have money to rent a bus or venue. Everyone had to squeeze the bus, and in winter they had to run a long way to other schools to rub the stadium. Even so, they still achieved good results in CUBA. How much can a campus team spend in a season? It's nothing more than travel expenses, venues, and buying some water. Can the school not afford it?

The students have no income. They have to pay for it out of their own pockets to participate in the competition. This is really inappropriate. The development of Chinese basketball is inseparable from campus basketball. CUBA will send more and more talents to CBA. Taking a step back, even if you can't play professional games, your experience in the school team will become the most unforgettable memory in the future.

Some students majoring in physical education may become physical education teachers after they come out. They can make more children like basketball. There is only one championship, but those teams and players who dare to compete are all winners. They promoted the development of campus basketball and ignited the spark of basketball, which is bound to affect more and more people.